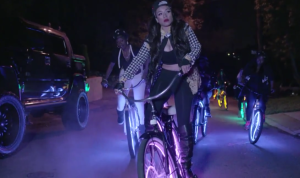 After debuting the track last month, Keyshia Cole now shows the world the Rick James side of her. Putting on some sexy lingerie at the start of the video and then grabbing her Debo bike at the end to “slap a b***h”, Cole is having no parts of her cheating husband. Bringing along Juicy J and some friends for the visual, Rick James is a vivid portrayal of her “husband”, Daniel “Boobie” Gibson, cheating on her in her own bed.

Originally rumored that it would be titled, Cole World, Rick James will be featured on Cole’s newly titled upcoming album, Point of No Return, which will be released later on this year!