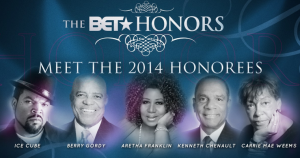 Every year, African-Americans look forward to The BET Honors to show appreciation to the well-known as well as learning about the unknown. Hosted by the multi-talented Wayne Brady, this year’s honorees were R&B legend Aretha Franklin, Motown founder Berry Gordy, rapper Ice Cube, the late South African President Nelson Mandela, American Express CEO Kenneth Chenault (who came up with the black card), and artist Carrie Mae Weems. Along with honoring African-Americans who have made great achievemnts in various fields, there were many memorable moments and performances (and some that should be forgotten for a while). If you missed the show, get a quick recap below!

1. Wayne Brady Pony & Baby Oil Moment
Comedienne, singer, and rapper Wayne Brady truly does it all! He opens the show with a baby oiled remake of Ginuwine’s hit Pony. Brady has the pipes, dance moves, and all! Watch here.

2. Tamar Braxton Gets Her Life & Goes Upside Down
Paying tribute to Motown founder Berry Gordy, the always over-the-top Tamar Braxton channels her inner Diana Ross as she sings the diva’s hit record Do You Know Where You Are Going To and my personal favorite Di record Upside Down. Despite the extra-ness, Braxton executes both tracks perfectly, from beginning to end!

3. Janelle Monae Learns Her ABC’s
In her signature black and white style, Janelle Monae brings Michael Jackson back to life as she gives fans a memorable rendition of ABC, as a tribute to Berry Gordy.

4. Smokey Robinson Pays Tribute To His Bestfriend
Having a friendship that has forged through both the hell and high waters, Smokey Robinson also hit the stage to honor his best friend Berry Gordy. Singing his hit record Tracks Of My Tears, Robinson is a timeless performer who barely uses any effort to get the whole audience singing along with him.

5. Mariah Carey Lip-Syncs Fo Ha Life
In her first televised performance for her new track You’re Mine (Eternal), Mariah Carey, as always, sparked much debate on social media on whether she was singing live or not. Though Mariah Carey is one of the most established artists of our time, if you are just going to lay on a piano seductively, you have no reason to lip-sync.

7. Jennifer Hudson’s Effortless Show Stopper
No matter HOW skinny she gets, the voice that has made Jennifer Hudson is still there! There are simply no words for how powerful it was to hear J. Hud take on some of Aretha Franklin’s biggest hits. Do yourself a favor and just watch below!